If you listened to this episode of Contagious Thinking, and have a couple of minutes to spare, please fill in this questionnaire about the podcast;

When bacteria ruled the world

Antibiotics don’t resolve viral infections. However, that doesn’t necessarily mean that research in virology can’t impact antibiotic resistance, a problem that according to the UK government, could see us “cast back into the dark ages of medicine”. It’s hard to imagine a world without antibiotics. But that’s exactly the world that we may be emerging in to in the next few decades without the work of scientists and clinicians, including even virologists.

In any field of science, it’s easy to look back at a time before a given crucial discovery was made, and marvel at the simplicity of our previous understanding. The miasma theory is a good example of this. For centuries, across a variety of different countries and cultures, the belief was held that diseases that we now know to be caused by microorganisms, for instance Cholera, were instead caused by miasma, meaning bad or polluting air.

At this time, microbiologist Robert Koch was able to demonstrate that anthrax infection was caused by bacteria, as opposed to miasma, and our understanding of how diseases spread and how we could treat them changed completely. It’s hard to look back without a sense of dramatic irony, but a key tool in revolutionising modern-day medicine, the antibiotic, hasn’t actually been around for very long, and we may not be able to utilise it forever.

Antibiotics, or anti-bacterials, are compounds that are used to treat bacterial infections, and were first discovered scientifically in the 1920s. Although bacteria have been producing them to use as weapons against neighbouring bacteria for a very long time. Since then, their use has become ubiquitous in both medicine and agriculture, with incredible benefits for human health in each industry. 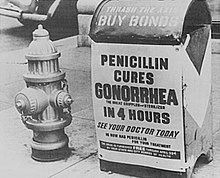 There are many types of antibiotic that work in many different ways, which is why prescribing them can be so complicated. Some, for example, suppress the growth of the bacteria to stop the infection in its tracks (“bacteriostatic”), whereas some antibiotics, such as penicillin, are “bactericidal”, and kill the bacteria directly. Treating infections is further complicated by the fact that in some cases, it’s not always easy to tell what’s causing them. For example, bacterial, viral or fungal infections of the nose and throat all have very similar symptoms, but antibiotics will only have an affect on the former.

The range of bacteria that are susceptible to the effects of a given antibiotic are collectively referred to as it’s “spectrum”. An antibiotic with a very broad spectrum will be able to treat more types of infection than one with a narrow spectrum, but they can also have a significant impact on our bacterial commensals- the microorganisms that live in and on our bodies, and under normal circumstances don’t cause disease (often referred to as “friendly” bacteria- but our relationship is a little bit more complicated than that). Upsetting the delicate balance of these bacterial populations can lead to problems such as antibiotic associated diarrhoea.

What do you mean by resistance?

Despite the many wonderful benefits of antibiotic therapy, there is a downside to us; Bacteria have many mechanisms to avoid the effects of antibiotics and they can even spread that resistance and become more resistant over time (see video above). This is especially true when antibiotics are not used correctly. One way to help this is to raise awareness and understanding of antibiotics and how they work. A survey carried out last year by the Wellcome Trust found that public understanding of antibiotic resistance is relatively poor, with most people interviewed thinking that it relates to the human body becoming resistant to antibiotics, as opposed to the reality of bacteria naturally developing mutations over time, or sharing the resistance genes between each other, which in some cases enable them to escape the actions of antibiotics.

To give a specific example, some bacteria make enzymes which can hydrolyse – or breakdown- and destroy antibiotic molecules, before they have a chance to act on the bacteria. An example of this is CPEs (Carbapenemase-producing enterobacteriaceae), which along with Clostridium difficile and Neisseria gonorrhoeae were listed by the CDC in 2013 as the top three “urgent” threats for the US in terms of antibiotic resistance. In September this year, the United Nations made a pledge to eradicate these kind of infections, following in the footsteps of HIV, non-communicable diseases and Ebola.

Resistance in the clinic and the lab

European antibiotics awareness day (which was on the 18th November) is a public health initiative organised by the European Centre for Disease Prevention and Control to highlight antibiotic resistance as a problem for public health, and promote public understanding of it.

In light of this, on this episode of Contagious Thinking we spoke to Dr Neil Ritchie, a clinical lecturer at the University of Glasgow and infectious diseases clinician in Glasgow’s new Queen Elizabeth University Hospital, about the fundamentals of antibiotic resistance, its history, and its future. Neil focuses on the clinical challenges of bacterial infections that are resistant to antibiotics, and promotes the role of antibiotic stewardship in fighting antibiotic resistance.

To find out about how we can improve the diagnosis of viral infections, and therefore better distinguish situations in which antibiotics can aid treatment (i.e. infections caused by bacteria) from those in which antibiotics are not necessary (i.e. infections caused by a virus) we also spoke to Dr Pablo Murcia (vet and PI) and Dr Sema Nickbakhsh (postdoc),  researchers at the CVR. Their work in investigating viral epidemiology and developing new ways to accurately and rapidly diagnose respiratory viral infections through next-generation sequencing may go some way to helping target antibiotics to the patients who truly need them.

In speaking to Neil, Pablo and Sema, it appears that while antibiotic resistance is a serious problem, it is a problem that can be solved, although it will require the continued coordinated efforts of the general public, clinicians and scientists (including those at the CVR) to allow us to continue reaping the benefits that antibiotics have given us as a society.

Out with the Murcia group, the CVR carries out a range of work on the diagnoses, detection and sequencing of viruses in the environment and the clinic, including ebola, emerging viruses, hepatitis C virus, dengue virus, herpes viruses and bluetongue virus. For further information see the labs of Emma Thomson, John McLauchlan, Tamer Abdelrahman, Andrew Davison, Viral genomics and bioinformatics group  and Massimo Palmarini.

The mission of the CVR is to carry out multidisciplinary research on viruses and viral diseases of humans and animals, translating the knowledge gained for the improvement of human and animal health. Contagious Thinking will act as a hub to communicate that science in an accurate, fun and engaging way through written articles, audio podcasts and video footage, produced by our staff and students. We encourage all feedback and dialogue.

This work is licensed under a Creative Commons Attribution-NonCommercial-ShareAlike 4.0 International License.